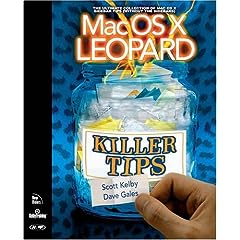 New Rider Press, like many other publishers, has different book series around a certain theme.  The "Killer Tips" obviously aren't about how to kill someone, but rather tips so sweet and juicy, you'd pursue them at all costs.  In difficult publishing or photo editing programs, these tips can often make or break a deadline for you.  The ability to save a few keystrokes everyday on a file that takes a few minutes to load saves time and therefore money.  They describe killer tips as the sideboxes of most manuals that give you neat workarounds or "did ya know" type blurbs.  They are also the tips that bloggers include often in their feeds.

With OS X, killer tips simply aren't as necessary.  I've read most of this series in relation to the operating system.  Each iteration of the MacOS makes usage easier and more straightforward and thus tips aren't as important.  The tips in this version are less killer than they were in Tiger and much less than Panther.  Even though all the cats of OS X are dangerous in the wild, they are becoming easier to understand and domesticate in each successive version. My review of Leopard Tips is harsher than Tiger Tips because there is simply less to cover and there is much more filler in this book that is inappropriate.  The "sexy side" of Leopard weren't really tips, but more observations and the "cheap trick" section was fifteen pages of practical jokes you can play on people running Leopard  Excuse me?  Tips on how to create fake dialogs to scare users and how to corrupt their video so they buy a new monitor is more like a little knowledge being dangerous.  Such "tips" ensures no IT department will want their users to keep this book at their desk.

Save for the "cheap tricks", a vast majority of the tips covered are so obvious even to the non-technical end user, that I'm surprised they authors weren't too embarrassed to include them.  Do most users really need to be told that you can hide the dock?  Also, this is either a pro or a con, but the last few chapters cover each iLife component.   Personally, I don't use iDVD, iMovie, or GarageBand so maybe those tips are worth the price of admission.  When you do the math, the actual Leopard tips are about 80% of the book; much less than previous versions.

As they state in the intro , this book is not really for beginners.  If it isn't for beginners, why do they include such basic tips as having iChat's status be your current song?  Yawn.  However, even a broken clock is right twice a day, and there were a few cool tips in the book, in particular located in the Spotlight section.  I learned a few cool shortcuts to writing searches, which might save me some time.  I also found out how to make printers auto-quit after launching a print job.  You click on their icon in the dock and choose auto quit.  Oh no, now you may have no reason to buy the book.  Of course, if it really annoyed me, I would have Googled and quickly found the tip.

While the book is accurate, it is generally too advanced for a beginner and too basic for an intermediate user.   The book might be good for a new Leopard user, and possibly for a seasoned Mac user that simply wants to know some cool things in Leopard and doesn't want to try to self explore.  However, that's a stretch.  I really can't find too many people who would get value from the book and the "cheap tricks" chapter, well that cheapens the book's value to negative numbers.

Pros:  Has a few good tips
Cons:  Not enough tips for most people to justify the purchase.  "Cheap tricks" are inappropriate.

Article was republished by the Lawrence Apple User's Group 2.0 here as well as other groups listed on the right