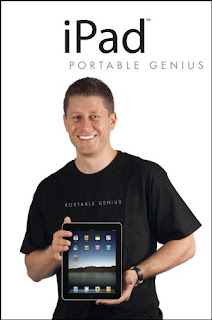 The "Portable Genius" line by Wiley is a relatively new series by them primarily designed to take advantage of Apple's unique meaning of the word "Genius." Primarily, they compete with the Peachpit Visual Quickstart guides. Using copious screenshots and short explanations of popular concepts, Portable Genius covers that 20% of features you'll use 80% of the time.

Both the table of contents and the index allow readers to hone in on the key functions which interest them. Concepts are well explained in a "how do I?" and a "can I?" format instead of a feature- or app-based approach. New iPad users will find this presentation more approachable.

Unfortunately iPad Portable Genius suffered from some poor editing in which too often the author didn't update the iOS steps that differ for an iPad and an iPhone or iPod Touch. On rare occasions, the advice given is controversial. For example, the author suggests if you can't sync all your content to your iPad you should consider deleting some content from your main computer. That is just irresponsible! Additionally the steps and screenshots in the book are primarily Macintosh based so Windows users might be a bit confused.


Article was republished by the Lawrence Apple User's Group 2.0 here as well as other groups listed on the right

Pros: functional approach with concepts well explained and easy to find
Cons: assumes end user has a Mac, some errors and confusing passages