GigaOM: How the Mac App Store Can Become Truly Transformative

In this article for GigaOM/TheAppleBlog, I suggest and possibly prediction Lion's distribution via the App Store.
Posted by Dave at 5:20 PM

GigaOM: Dining Out With Your iPhone for Valentine’s Day

In this article I wrote for GigOM/TheAppleBlog, I cover a list of apps for dining out and focus on Valentine's day
Posted by Dave at 5:15 PM 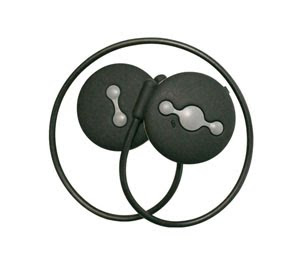 Whether you are listening to dance, jazz, or disco, you won’t be hearing the blues with the Miccus BluBridge headphones. This headphone/hands-free combo rocks! I am amazed at the quality of sound and ease of use coming from these unassuming headphones.

Hands-free bluetooth devices for the iPhone are a dime a dozen. People walking around town appearing to talk to themselves, until you see the blue blinking device coming out of their ear. They are either a human-cyborg hybrid or using a Bluetooth handsfree.

The BluBridge is different because it’s not only an excellent hands-free interface for your iPhone (or other Bluetooth enabled phone ), but also a rich and full stereo speaker system. When talking to others with the BluBridge, the call is in stereo (so your mother-in-law can nag at you in 360 degrees). Microphone quality is average and consistent with most other Bluetooth devices. Good to great, but people can hear you are on a hand-free.

Being able to listen to my iPhone without the hassles of wires opened up amazing new possibilities. We’ve all accidentally snagged our iPhone cord and seen the phone go flying (fortunately I have an Otterbox case). Even without the hazard, it’s just darn inconvenient to have wires while listening to music.

My immediate killer application for these headphones was the gym. They are extremely lightweight and water resistant with excellent earbud holders so they won’t fall out during heavy exercise. Instead of an awkward combination of a case for my iPhone and wires that would constantly get caught on equipment, I simply placed my iPhone in a safe position at the gym and worked out while getting my grove on.

Controls for answering calls as well as volume and previous/next track are all integrated into the sides of the headphones. Unfortunately there is no indicator as to the battery life but Miscus claims 9 hours of music and 8 hours of talk before a recharge. Recharging is somewhat tricky because it doesn’t use a USB mini or micro connector but it’s own unique USB charging cable. I expect today to not have to carry around different cords for charging, but that’s really the only fault I found with the device. Oh, one other complaint, given the round disks hanging out of your ears, you may look like Princess Lea or Lobot from Star Wars depending on your gender.

With a retail price tag of $50.00, you get quality headphones and hand-free all combined into one. I have completely fallen in love with these headphones and take them everywhere now. I’m singing the blues with a smile on my face

In this article for GigaOM/TheAppleBlog, I take Google's shopper app out for a test spin and report on it
Posted by Dave at 9:47 AM

For many new iPad users, Apple's magical and revolutionary device acts as a laptop and sometimes even a desktop replacement. Many iPad users just need to check email and surf the net and a traditional laptop or desktop is overkill. For these users, the key features of the iPad are its long battery life and its simplicity, rather than its portability. These people are most likely the target market of the iCapsule.

This integrated Bluetooth keyboard and case copies the original design of the first iBook so much that more than one person asked why I was carrying a black iBook. If they ever make this in blue or orange, there will be many confused people out there.

When the iPad is placed in this case, it looks like the typical laptop: screen on top and keyboard on the bottom. Close the iCapsule just like you would a clamshell style laptop (though the iPad won't go to sleep when you close it) You'll notice there isn't a pointing device or trackpad on this "laptop", which got annoying after a while. I was so used to typing on it like a laptop I'd instinctively move my thumbs towards the trackpad rather than the screen. That's a testament to how seamless the transition from the iPad experience was.

The actual case provides no padding, but has a handle and is made of hard plastic so mishaps are less likely. The screen is somewhat protected from impact when closed because it is flush with the keyboard. Occasionally debris from the keyboard was transferred to the iPad screen when the case was closed (incidentally, this is a common problem with traditional laptops).

While the iCapsule had your typical keys including control, option and escape, it replaced the typical function keys with a variety of handy quick keys such as full volume and music controls (pause, play etc) as well as selection, copy, spotlight and keyboard toggling. This is very handy for someone doing serious work on an iPad.

iPad purists will balk at the amount of bulk this adds to the iPad and that it somehow defeats its purpose. Partially they are right. Many people replace their laptop with an iPad because they want a lightweight powerful alternative with incredible battery life. Of course, serious typing is near impossible on the iPad. Typing on the iCapsule was quick and responsive. The device takes two AA batteries, but the keyboard goes to sleep after non-use.

Unfortunately the iCapsule suffers a near fatal flaw that I hope gets fixed in later releases. While the designers left space to plug in headphones on the side, they failed to include a port for the 30 pin connector. The only way to charge your iPad is to remove it from the iCapsule. Over time it becomes a pain to constantly remove your iPad in order to charge it. Because the keyboard is bluetooth, you'll be reducing your battery life significantly and thus charging is more important. Moreover, the sleep button was difficult to access while in this case. The designers left little room for it. If you put the iPad in backwards (which you can do), the iPad will constantly go to sleep due to the pressure. Accommodations should have been made to make sure that all ports were available and you couldn't put the iPad in its case backwards.

Serious typists and those making the transition from a laptop will really enjoy how easy and natural the iCapsule case and keyboard is to use. Be prepared for the constant removal each time you want to charge the iPad though

Pros: Ideal laptop replacement with responsive and spacious keyboard
Cons: Lack of support for charging while in the case or guides to prevent the iPad from being put in backwards

GigaOM: All Eyes were on iPad at this years Macworld

In this article for GigaOM/TheAppleBlog I review what I saw at Macworld Expo 2011 and the industry trends it represents
Posted by Dave at 9:43 AM

In this post for GigaOM/TheAppleBlog, I cover the App store's entry into twitter and my predicitions
Posted by Dave at 6:12 PM

GigaOM: A Guide to Mac Diagnostic and Repair utilities

In this post for GigaOm/TheAppleBlog I cover a variety of Macintosh Utilities and the best circumstances to use them.
Posted by Dave at 4:17 PM