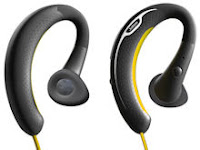 Being a reasonably active person who loves listening to music (and occasionally picking up a call) while working out I was very excited to hear (pardon the pun) about the Jabra Sport Bluetooth headset. These are great workout companions and all around excellent handsfree for your iPhone.

The Sport has 3 basic functions: Bluetooth audio, FM radio, and handsfree phone. All these functions are integrated into an extremely lightweight set of earbud style devices that are rain, dust and shock resistant.

The Bluetooth audio had great sound, but it was often a bit too low to listen to at the gym. I had trouble getting them to fit correctly into my ear. Fortunately a set of Yurbuds came to the rescue and I was extremely happy! The FM radio was good for gyms that broadcast the TV audio system on a close range frequency. Now I could watch TV and do the treadmill at the same time.

As a handsfree accessory for my iPhone, it was very easy to make and receive calls. Voice Control worked like normal which is to say not so great (no iPhone 4s with Siri test with!) Even while on the run, callers could hear me well and I could hear them. I was able to hangup on a caller and end the conversation from the controls on the earbud.

In general as a Bluetooth accessory, this device had some great added features that made it a delight to use. The device uses lights as well as verbal signals to tell you when you are paired, powered on, powered off, and connected. This is a great feature since the device is in your ear, you can’t easily see if it’s properly working.

Besides difficulty with the sound levels, as a glasses wearer the device’s wrap around style did cause some interference. I’d have to put the Jabra on first and then my glasses; not a major inconvenience, but a minor annoyance.

The killer feature was the way it tracked battery. When the battery gets low it announces battery low over your audio (but not during a call). As it gets lower the warnings get faster. Additionally the device taps into a underutilized iOS feature that tracks the battery level of a Bluetooth handsfree device. The icon shows up next to the Bluetooth icon and is in the shape of Apple’s original Bluetooth handsfree for the iPhone. Now I could see exactly how much I had left and when I need to recharge. Nothing is more frustrating than your tunes cutting out midworkout. With 4.5 hours of talk time and 3 hours of music you’ll have to charge it often, but it uses a standard micro-usb port as well as includes an AC adapter for charging independent of a computer.

Overall great sound with a set of killer features that make this a welcome addition to your workout.

Four out of Five Dogcows

Article was republished by the Lawrence Apple User's Group 2.0 here as well as other groups listed on the right
Posted by Dave at 3:41 PM