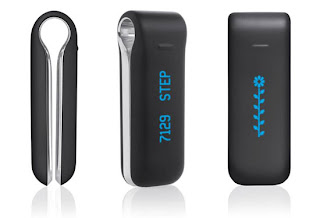 As the weather starts turning nice and we start shedding the layers of clothing and blankets, many of us have noticed some of the inevitable winter weight gain. The Fitbit is an affordable solution to track your exercise and overall fitness.
The Fitbit is about the size of a small money clip and can be put in your pocket via a clip-on or worn around your wrist. Along with the Fitbit monitor is a a docking/charging station that creates a wireless port connection on your computer. When your Fitbit tracker is within range, the docking station uploads data to the Fitbit website so you can access tracking via the web and the iPhone app.
The tracker is a high-tech smart pedometer. It looks not only at how many steps you’ve taken but how many stairs you’ve climbed and monitors your sleep for you. Taking in account your height, weight, and age, it determined how many calories you are burning based on your activity and basal metabolic rate. Compared to more advanced analyzers such as a heart monitor or the BodyMedia Fit Core, the numbers were consistent. You can easily track your progress throughout the day and set goals for yourself.
The iPhone app also include a calorie tracker, but the database was very limited. Instead I used Loseit! Fortunately the FitBit has an API (http://www.fitbit.com/apps) that allows other programs to interact with your Fitbit. Combining the FitBit with LoseIt! made it very easy to track what I ate everywhere. Other apps include the ability to use the Aria Wi-fi enabled scale so that way you don’t even have to enter your weight.
Similar to such popular social apps as Foursquare, the Fitbit website allows you to compete with friends and earn badges such as having walked 250 miles or your best number of stairs in one day. This gamification makes it easy to create incentives to go a bit farther each day or climb a few more stairs.
According to the Fitbit specs, the device’s battery life is a minimum of three days and average is five to seven days. My personal experience matched that as I would usually only dock it on the weekend and had no problems with battery life. The charging must be via the dock so travelers could have problems if they don’t bring a laptop on a long trip. The Fitbit will only sync with the dock connected to a computer since it has no inherit ability to directly send data to the Fitbit website.
My only major concern with the device was its very small size. When I’d go to the gym or get on the elliptical at home, I’d forget to clip it on when I changed clothes. It was a habit I had to train myself to do: always put on the Fitbit. Once or twice the device had a near fatal run-in with the washing machine as I’d forget to take off the Fitbit before throwing clothes in the hamper. A frantic run to the basement saved the Fitbit before someone pressed the start button on the washing machine.
For $99 the Fitbit delivers a great way of tracking your fitness progress and keeping you accountable. The long battery life and the web interface and APIs make it easy to connect with others working on their fitness and track a variety of factors that can contribute to better fitness. Use this in connection with your own weight loss journey and have fun with your process. It makes working out almost enjoyable!
Pros: Fun, flexible and powerful way to track your progress
Cons: requires a computer for syncing, small size makes it forgettable at times
Five out of Five
Posted by Dave at 10:45 AM